Epilepsia Open Prizes started in 2018 and are given to the two best original articles, clinical and basic science, that were published during the preceding year.  The Epilepsia Open Prize – Clinical will be awarded at the 13th ECE.

Carla Bentes studied at the Faculty of Medicine of Lisbon University. Her post-graduate clinical training, first in Neurology and after in Neurophysiology, was mainly performed at Hospital de Santa Maria in Lisbon. She was an overseas fellow at the Department of Clinical Neurophysiology at King’s College Hospital London. Currently, she is the head of the EEG/Sleep Laboratory at the Department of Neurosciences and Mental Health, member of the Refractory Epilepsy Reference Centre at Santa Maria Hospital – North Lisbon Hospitalar Centre, and a PhD Finalist Student at Lisbon Academic Medical Centre in Lisbon.

During her first years of neurology residency she was strongly influenced by Dr. Francisco Pinto, one of the first Portuguese epileptologists and at that time the President of the Portuguese Chapter of the International League Against Epilepsy. With him, she discovered the clinical challenges and caveats of epilepsy diagnosis, treatment and outcome prediction. She also had the chance to learn the clinical usefulness of EEG with Professor Teresa Paiva and to grow up in a very productive clinical neurology research environment at the Department of Neurology whose Director, Professor José M. Ferro, became her PhD supervisor.

Her clinical interest and research curiosity for epilepsy developed together. In the clinical environment she realized that epileptic seizures and cerebrovascular disorders are two of the most frequent neurological pathologies imposing important mutual challenges. Furthermore, in the last years, stroke care has remarkably evolved and facing a new paradigm of acute standard care (centered on multidisciplinary Stroke Units), she thought that epileptic seizures (as stroke complications) deserved to be rethought. Also, in everyday clinical practice, she realized that the EEG is an essential neurophysiological exam in the evaluation of patients with epileptic seizures, status epilepsy and/or epilepsy, both for diagnosis and classification, as well as for the establishment of a correct treatment or outcome prediction. However, the clinical usefulness of the EEG in the differential diagnosis of transient neurological symptoms, namely in the differentiation between a transient ischaemic attack and some epileptic seizures, and also in the diagnosis or prediction of post-stroke seizures or in post-stroke prognosis prediction, remained uncertain. For these reasons, she decided that her PhD thesis would be about post-stroke seizures and EEG in cerebrovascular disease. 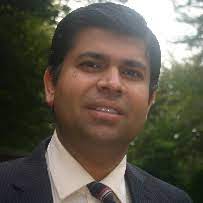 Rohit Shankar is a Consultant Developmental Neuropsychiatrist and clinical director for the adult Intellectual Disability Neuropsychiatry services for Cornwall Partnership NHS Foundation Trust. He is an Hon. Clinical Associate Professor (Senior Clinical Lecturer) at Exeter Medical School. He did his MBBS in Coimbatore Medical College followed by post-graduation at the National Institute of Mental Health and Neuroscience (NIMHANS) India.

He was conferred into the Membership of The Most Excellent Order of the British Empire, British order of knighthood instituted in 1917 by King George V to reward outstanding achievement or service to the intellectual disability community and was awarded the Royal College of Psychiatrists Fellowship (FRCPsych) as a mark of recognition for his work to Psychiatry in 2016, as well as many other awards and commendations. He has over 100 publications, oral and poster presentations in peer reviewed journals and international conferences, chaired three national RCPsych College Reports and contributed to five books.

Rohit Shankar’s research focus is SUDEP and the impact of ID in PWE. He has set up the UK ID AED research register to look at outcomes of AEDs in people with ID which has been adopted by NIHR and is currently running the PIXIE genetic project in Cornwall. He has created the SUDEP and seizure safety checklist and released EpSMon which has positive Cochrane reviews and NHIR systemic technological appraisals and is the world’s first evidence based mobile application for people with epilepsy to monitor their risk. The checklist and app are both part of the UK national epilepsy commissioning toolkit.